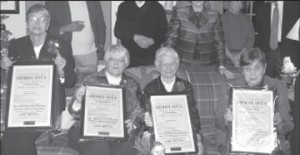 It was with great pleasure that the Board of Directors bestowed the title of Honorary Members for Life to five Fincastle residents and HFI members at the annual membership Holiday Open House on December 12, 2009. The recipients are Angela Coon, Peggy Davis, Pat Simmons, Paige Ware, and Mary Westerman. Of these, Peggy, Pat, and Mary helped to found the organization in 1967 when the idea of a Council for the Beautification & Preservation of Fincastle was born. “The first meeting of the Council for the Beautification and Preservation of Fincastle was held in the Court House on Thursday, April 6, 1967 at 7:30 pm, with approximately 80 Fincastle residents present. Mrs. Robert Blanton, President, presided and opened the meeting with prayer. The President stated the purpose of the council as being the beautification and preservation of historical Fincastle, as the name of the Council implies, and the planning and carrying out of walking tours for people attending conventions at Hotel Roanoke. She stated that this Council has been approved by the Fincastle Town Council and is sponsored by the Big Spring Garden Club….She further stated that the Council had its beginning in the big Spring Garden Club and several committees were set up and activated as follows: Clean-up, Street Lighting, Residential Beautification, Business Beautification, Business Beautification, Parking and Historical and conservation….” (Taken from Minutes of the April 26, 1967 Meeting.)

Since that time, thousands of dollars and volunteer hours have been contributed through the hard work of those honored. Our congratulations and humble thank you is extended to:

Angela Coon: Helped write the classic, “Around Town,” and secure photos for the book. Co-Chaired or Chaired the Fincastle Festival for at least eight years. Before chairing the Festival, worked in The Country Store that was part of the festival and chaired this event. Served on the Board of HFI.

Peggy C. Davis: A founding member; Treasurer during the early years; Chairman of the Art Show for the Fincastle Festival about ten years. Peggy also served as President and worked on publicity for the Fincastle Festival and “Around Town.” Peggy has lived in eight houses in Fincastle and fondly remembers going to movies at the Castle Theatre and riding horses down Breckinridge Mill Road.

Pat Simmons: Was present at the Big Spring Garden Club meeting in 1967 when the idea of the Council was born and has been a continuous member since then the beginning. She served on the committee that refurbished the Crowder house on Church Street. She has also been President during which time HFI provided the benches and trash cans that are still in use on the streets of Fincastle. Pat chaired the committee that sold the prints – Four Seasons of Fincastle – by artist Connie Marsh as successful fundraisers for two years. She conducted town tours for about nine years, illustrated how to make a braided rug at the Fincastle Festival, and created and implemented the HFI Scholarship Program.

Paige Ware: Paige worked on the very first Fincastle Festival in 1968 then chaired the next 10 Fincastle Festivals, from 1969 – 1979. Paige never served as President, but during years when there was no President or other officers, she acted as Vice President and Secretary. She also worked with the Home Tour. Although not HFI projects, Paige will always be remembered for her role coordinating the annual Fincastle Christmas Parade and raising money for the annual July 4th. fireworks display which she still does today.

Mary Westerman: Mary Ellen Booth Westerman was born in the front room of the house on Fincastle’s Main Street now known as Solitude. With the exception of two years when attending Averett College, Mary has lived in or just outside Fincastle her entire life. She is a founding member of Historic Fincastle, Inc. and has been a member since then. Mary has served on the HFI Board of Directors, chaired the festival in all the various stages of its development, and has been an HFI officer. She is one of the authors of “Around Town,” wrote a book titled, “Mary’s Memories”, has painted scenes of Fincastle, and shares her love of the town with anyone who will listen.

Congratulations to each of you for your many contributions and achievements and for helping to make Historic Fincastle, Inc. the vital organization it is today.