Fincastle: Through the Years 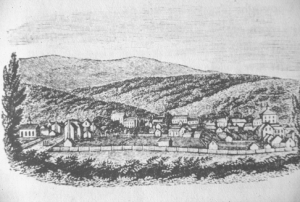 Drawing shows the Town of Fincastle c. 1840
From Howe’s Historical Collection of Virginia

During its two-hundred-year history, Fincastle has wielded influence far beyond its boundaries.  The western territory of Botetourt County stretched all the way to the Mississippi River in 1770, and many settlers passed through on their way west during these early years.  Many of those passing settlers stopped in Fincastle, the seat of this large county, to record deeds and transact business as well as purchase goods and services from the merchants that had opened businesses in the town.

In 1772, when the town was formally established, a small settlement already existed nearby.  This settlement grew up around Miller’s Mill and probably came into existence during the 1750’s.  When the need arose to establish a county seat, Israel Christian, a local merchant and land speculator, gave 45 acres just south of Miller’s Mill for this purpose.  This tract was divided into 45 half–acre lots to be offered for sale, with land reserved for a court house, a church and a jail.

A list of taxpayers prepared in 1784 reveals that growth took place quickly during these first few years.  It listed 59 buildings, including 26 log dwelling houses, 21 cabins, one “double” cabin and 11 frame dwelling houses.  Court Order books record the establishment of a number of taverns, ordinaries, and other commercial endeavors that sprang up to meet the needs of the many travelers passing through.

During the first half of the nineteenth century, growth continued at a strong pace, with further commercial expansion and construction of the Baptist, Episcopal, Presbyterian, and Methodist churches.  Although it was no longer one of the gateways for western expansion, Fincastle continued to attract people with its goods and services and various social and cultural functions.  It became apparent, however, that transportation would be vital to the town’s future.  A group of concerned Southwest Virginians met in Fincastle in 1845 and petitioned the General Assembly either to improve transportation to the Western part of the state or permit the B&O Railroad to extend its rails down the valley of Virginia.  Partly as a result of this meeting, the James River and Kanahwa Canal was extended to Buchanan.

But much of Fincastle’s focus remained rural.  A number of large plantations were located in the countryside surrounding the town.  Plantation life has an impact on the community, increasing commercial traffic and making goods and services more readily available.  House guests at the plantations in variably spent part of their stay shopping, observing court, or attending entertainments in Fincastle. They frequently worshipped at on of the area churches. 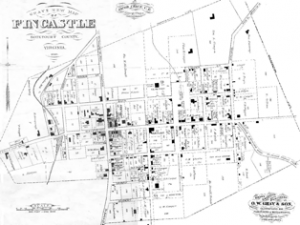 The Fincastle Historic District was named to the National Register of Historic Places and the Virginia Landmarks Register in 1969, updated 2012

Its rural setting proved to be a blessing to Fincastle with the outbreak of the Civil War.  Although Union Troops marched through it, the town suffered no physical damage.  However, the loss of many able young men and the devastation of the economy of the South were deeply felt in the community.

Ironically, peacetime would bring a more profound disturbance.  The fire of 1870 leveled much of the central part of town.  The loss of many original eighteenth-and early nineteenth-century buildings changed the face of the community forever, and the economic setback added to the hardship wrought by the war.

As prosperity began to return to the South, Fincastle’s commerce renewed itself.  But at least some residents thought growth wasn’t fast enough.  During the 1880’s transportation again became an issue.  A Group of businessmen formed the Fincastle Land and Improvement Company and sought a railroad line through town.  Plans were to enlarge Santillane, a plantation just south of Fincastle, into a hotel and to develop the area around it as an expansion of the town.  The plans were never realized; however, as the major railroad line into Western Virginia was laid south of Fincastle.

Without a railroad to spur its growth the town developed into a quieter direction as the twentieth century approached.  For a time it became a “spa.”  Word of Fincastle’s tranquility attracted increasing effort to escape the heat of the epidemics of more southern climates and to take advantage of the healing properties of the ferro-magnesian spring waters.  This influx of summer visitors continued until well into the twentieth century.  Gradually the”spa” way of life disappeared and with it a good amount of Fincastle’s tourist trade.

In the modern century, the town maintained its identity as the county seat, keeping the quaint court house square as the focus of its small-town life.  After World War II, many residents found Fincastle a charming place to live but worked and shopped outside the community.  The treasure of life in Fincastle today remains this inherent resident charm. 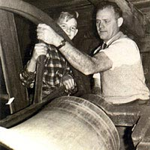 Willie and Bill Simmons at the Courthouse Bell

(* From The Library of Congress: Local Legacies. “Celebrating Community Roots”)

Each year the New Year’s Eve ringing of the bells in the town of Fincastle is a synchronized and solemn requiem to end the old year and a joyous tolling to celebrate the beginning of the new year. The Botetourt County Court House and four churches join in a ritual that was begun so long ago that no one knows exactly when it started. Not just anyone rings the bells; that duty and honor has been performed by the same families for generations.

On December 31, 1999, promptly at 11:45 p.m., Willie Simmons, the third generation of his family to lead the ceremony, signaled with a flashing light to the persons in the belfry to begin. The court house bell rings first, which is followed by the Presbyterian Church bell, where illness broke the string of three generations of McDonells and a new tradition has started for bell tolling. The Baptist Church bell is next with the third generation of Boltons doing the honor. Next rings the Methodist Church bell where brothers Kerry and Bill Campbell are the second generation in charge; and on to the Episcopal Church were another third generation family, the Waids, pull the rope for the traditional one peal of the bell. This sequence of ringing lasts for 15 minutes, then the courthouse bell rings 12 times, marking midnight. A second generation of the Kessler family plays taps, and the year is rung in. Simmons follows with three shots from his shotgun to signal the beginning of the ringing of all the bells together for ten minutes to celebrate the new year. “The ceremony is simple: the bells toll for the old year, then strike midnight; taps are played, and the new year is struck. Then the shotgun blasts in the new year and the bells peal and peal.” (From The Roanoke Times, 1978 – Originally submitted by Congressman Bob Goodlatte,  6th. District)

This New Year’s Eve ceremony has been popular for well over 150 years. Revelers gather throughout the Town for the celebration. At fifteen minutes until midnight the tolling begins. The bell in the Courthouse is struck, and afterwards, at twelve second intervals, bells of the churches ring in a clockwise order about the town: Presbyterian, Baptist, Methodist and Episcopal. This continues until the bell at the Courthouse strikes twelve. Taps are played to signify respect for the dying year. The bell-ringers in the Courthouse then strike the digits of the New Year, for example one-nine-nine-eight. Then three shotgun blasts indicate that it is time for the bells to joyously welcome the New Year by ringing for an additional ten minutes.