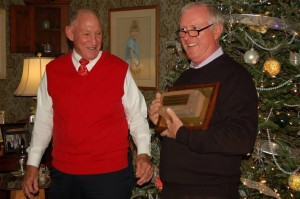 The Board of Directors of Historic Fincastle, Inc (HFI) voted to recognize Scott Critzer for his tireless work on the Fincastle Sidewalk Grant project.  HFI presented Critzer with a plaque noting his leadership and perseverance on the sidewalk project at its annual Membership Open House held at Santillane.  Critzer spent countless hours on the sidewalk project starting in 2007 and continuing through 2014 when the project was completed.  The 2007 Fincastle Town Council, under his leadership, started looking at renovating the town’s aging sidewalks. Mayor Critzer led the council and citizens through a series of community meetings to gauge public interest in the project.  The town council applied for grant funding with the Virginia Department of Transportation (VDOT) for renovation to its sidewalks through a program called TEA, or Transportation Enhancement Act, which offered an 80 percent matching grant, and the remaining 20 percent being the responsibility of the Town of Fincastle.  In the spring of 2008, VDOT notified the Town that it would be eligible for funding for the project in the neighborhood of $1 million.

Mayor Critzer continued to spend hours working on  committees with the engineering firm to design and plan the sidewalk paths, meet with concerned citizens, find solutions for infrastructure issues, identify impacts on the homeowners, explore and make materials choices and control overall costs of the project. A construction contract was awarded to Virginia Carolina Paving in December of 2013.  An unforeseen obstacle occurred in January of 2014, when VDOT noticed that the street configuration of this historic town would not meet current Federal traffic lane and parking area width requirements.  Thus Critzer and many other citizens spent time considering the impact of one-way streets on the town.

Scott Critzer worked from 2007 to 2014, seven years, to see this project come to fruition.  HFI and its members recognize him for his dedication to this project and the town of Fincastle.  The sidewalks have enhanced the town and its historic character for many years to come.